Share this article：
The number of views：948
■ Date: March 25, 2021
【What is next for China’s hydrogen supply chain (1) --- Production】
*For relevant report, please also see our report "Latest trend of Hydrogen Supply Chain in China (2021)"
Although 2020 was a rough year for most industries, hydrogen industry has welcomed some good news from Chinese governments. At national level, the state government has officially recognized hydrogen as energy by including hydrogen into energy statistics reporting system and revised energy law. At local level, more and more governments have issued development plans for hydrogen and full cell vehicle industry (Fig 1).
Fig 1.

One common plan shared by local governments is the promotion on power-to-gas in the long term, the zero-carbon hydrogen production utilizing renewable energy. The root is that hydrogen, the cleanest fuel, can contribute to China’s ambition to achieve carbon-neutral goal by 2060. [Eco-China: How Carbon Emission Trade Nurtures Low-carbon Economy]. Another vital reason is that hydrogen is a solution to power curtailment and imbalance caused by the volatility of renewable power generation. [Four reasons why China promotes hydrogen energy (Part 1)]
In the following three decades, what energy sources can be utilized for fuel-cell-use hydrogen production? What business opportunities can the decarbonization trend entail?
Three types of hydrogen
Hydrogen production comes in three shades based on emissions generated in production process: grey, blue, and green.
*Emissions level is according to the latest group standard Low-carbon Hydrogen, Clean Hydrogen and Renewable Energy Hydrogen Standard and Confirmation issued by China Hydrogen Alliance.
Three development phases of hydrogen fuel production
Based on our assumptions, China would go through three development transitions from blue and grey hydrogen to green hydrogen production between 2020 and 2050 (Fig 2). 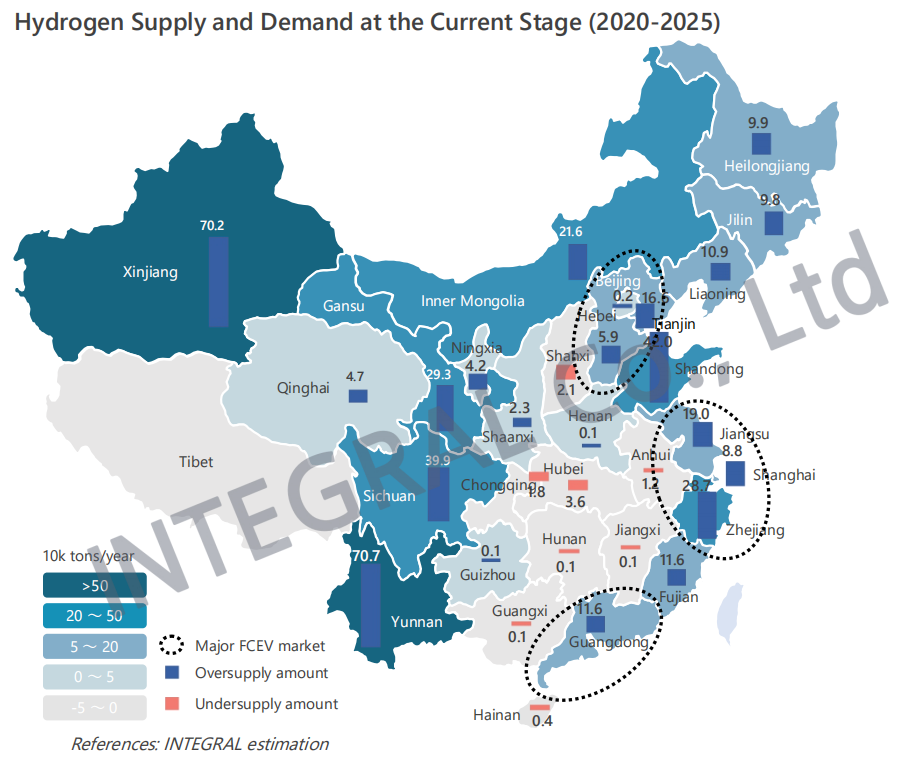 At present, grey hydrogen is the major supply given around 98% of hydrogen is used for industrial feedstock. Despite of the lowest production cost (around 10 Yuan/kg) and resourceful fossil fuels nationwide (Fig 4), particularly in coastal provinces such as Shandong, Jiangsu, Guangdong and Liaoning, grey hydrogen is not qualified and sustainable for fuel-cell applications due to emissions and impurity issues.
Fig 4. 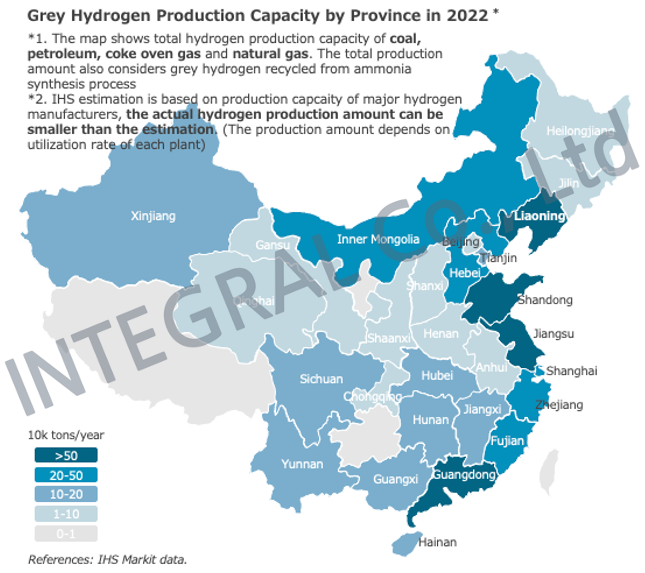 Grey hydrogen production is discouraged by the latest national reward policy, Notice on the Development of Fuel Cell Vehicle Demonstration Applications [Subsidy Policy Analysis], which says that hydrogen production with less than 15 kg CO2/kg H2 can be rewarded RMB 3 Yuan/kg. In this respect, only blue and green hydrogen can satisfy the emission-control standard. In the future, similar local reward policies can be expected with reward amount benchmarking the national policy. In this case, 6 Yuan/kg reward would be granted to blue and green hydrogen suppliers, around 40% of green hydrogen production cost using curtailed renewable power.
In addition, the latest national standard Fuel for PEM FCEV (GB/T 37244-2018) regulates that six types of impurity shall be under ppm level, because hydrogen containing impurities higher than given level can damage fuel cell and shorten its lifespan. Unadvanced purification and impurity testing technologies are two key barriers to the application of grey hydrogen to fuel cell.
Fig 5.

Instead, by-production hydrogen after PSA treatment can reach 99.99%~99.999% purity with low-level impurities, which is qualified for PEM FCEV use. East China, including provinces like Zhejiang, Jiangsu and Shandong, is playing a leading role in blue hydrogen supply sourced from chemicals, followed by Guangdong and Liaoning (Fig 6). At current stage, chlor-alkali manufacturers are the major suppliers of by-product hydrogen. In the next decade, chemical manufacturers of PDH and ethylene are expected to outrace chlor-alkali counterparts to be major suppliers of by-product hydrogen, because chlor-alkali industry is already mature while PDH and ethylene industries have great development potential.
Fig 6. 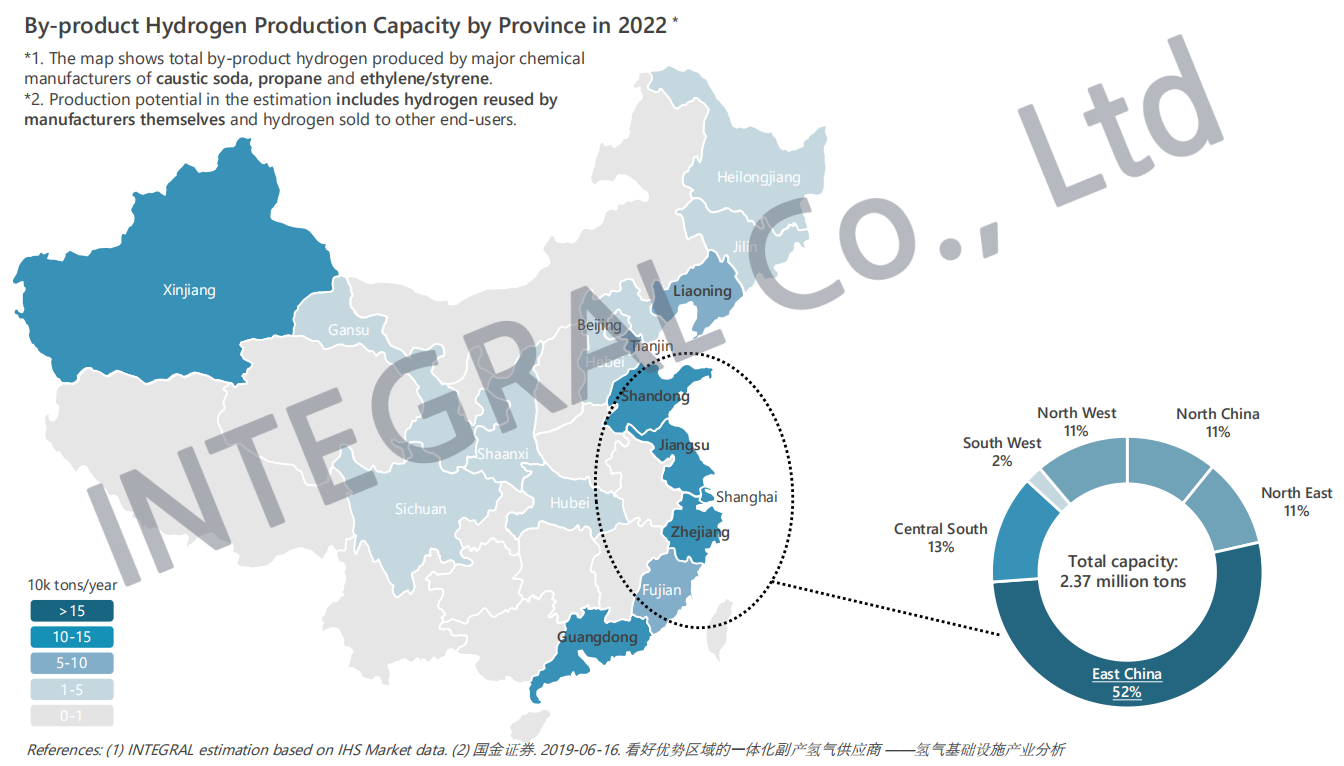 In theory, no extra GHG emissions will be generated during hydrogen purification process. The biggest drawback is that by-product hydrogen supply is not demand-driven. Specifically, it is determined by the demand of main industrial products instead of actual hydrogen demand. In this case, hydrogen supply is unstable and limited as it fluctuates based on chemical industry output.
During the same period, a small amount of green hydrogen will be produced from curtailed renewable power and supplied for demonstration projects (Fig 7). For example, Hebei ranks first in developing power-to-gas projects by utilizing curtailed wind power to supply green hydrogen for fuel cell buses running in Beijing Winter Olympic Games 2022. Other projects are mostly in north area and Sichuan province.
Fig 7. 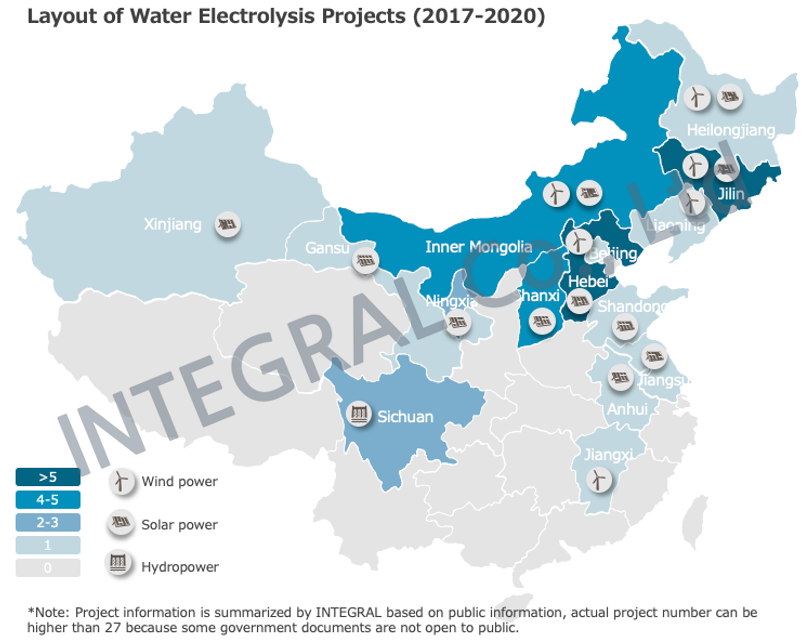 In the medium term (2026-2035), industrial by-product and curtailed renewable power continue to supply the majority of hydrogen fuel nation-wide.
Fig 10. 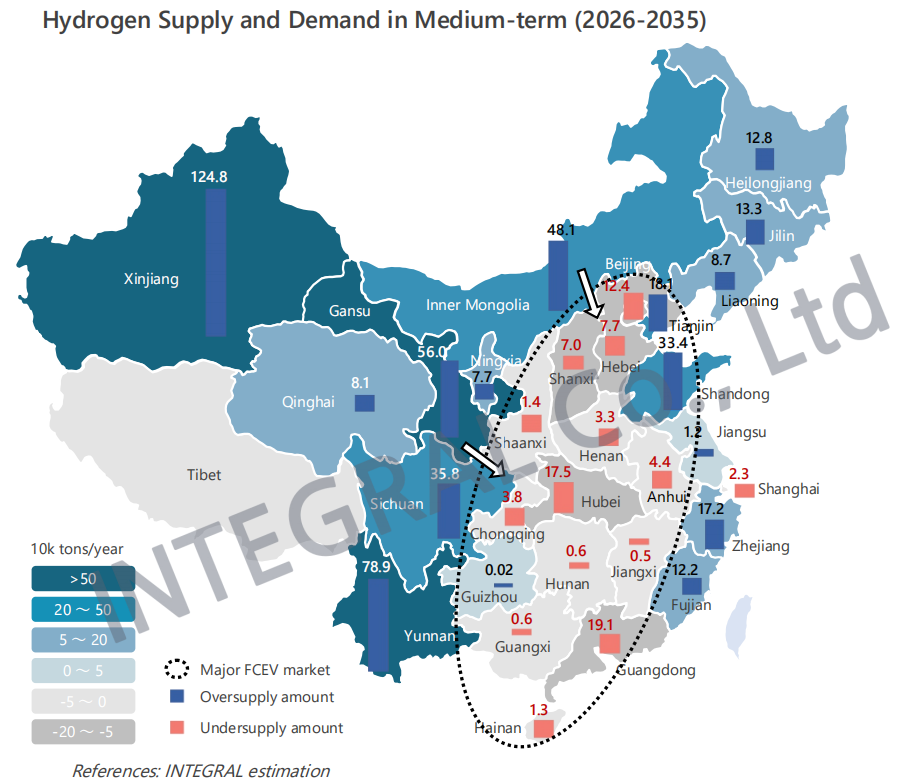 By 2035, annual production amount of by-product hydrogen is estimated to remain stagnant at around 3 million tons/year, short of annual demand of FCEV (around 4.3 million tons/year). Green hydrogen can compensate for the supply shortage thanks to competitive production cost (12.2 ~ 15 Yuan/kg) by utilizing low-cost curtailed renewable power in North and Southwest China, yet hydrogen production CAPEX remains high. A further reason of the steadily growing supply is that power-to-gas is a key measure of power balance management to minimize the gap between power supply and demand (Fig 11). However, constrained by local resources and storage/transport technologies, green hydrogen produced could be difficult to supply every demand area. Coal-to-gas, therefore, would be another supply option for coal-resource provinces, such as Shanxi, if purification and CCS technologies were advanced and price-competitive.
Fig 11. 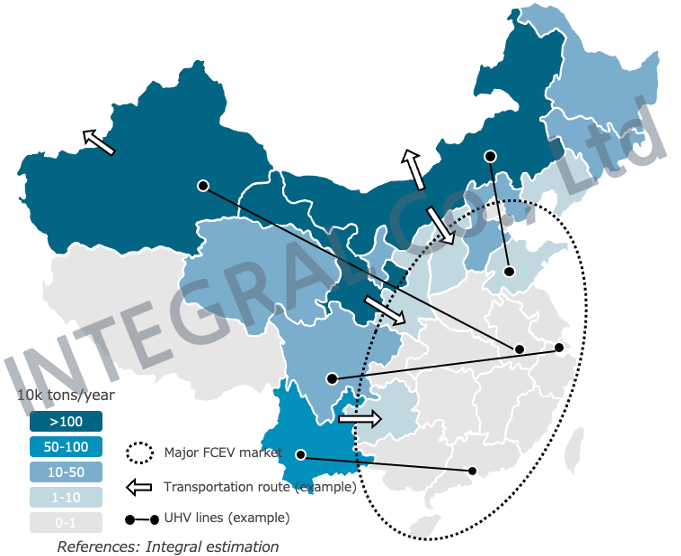 Renewable power is a promising hydrogen source in China, supplying around 70% of hydrogen by 2050 base on China Hydrogen Alliance estimation. One reason is huge production potential. Abundant renewable resources in North and Southwest areas allow China to meet hydrogen fuel demand both domestically and internationally. The other driver is that reduced hydrogen production CAPEX allows hydrogen to become a consumer of both curtailed and on-grid power. This is also because power production CAPEX of renewables is projected to gradually drop to lower than fire power level, as the installment scale of renewable power rises to achieve China’s carbon-neutral goal by 2060. So far, several state-owned energy investment groups and power generators have launched demonstration power-to-gas projects using curtailed power around China (Fig 7), such as SPIC, CNE Energy, China Huaneng Group. However, high generation cost of renewables may stop green hydrogen from centralized production using on-grid power, which could only be an economical source if green electricity price and hydrogen production CAPEX. further declined.
In addition to the mainstream method water electrolysis, biomass gasification and microbial conversation are two advanced production technologies in the long term. Biomass energy can be of great potential for green hydrogen production, given that a daily supply of 400 tons life waste can produce hydrogen supplying 1000 fuel cell buses or logistics trucks. Hynertech, Tri-Ring Group and Wuhuan Engineering have launched a demo project of hydrogen carriers produced from life waste in Wuhan, which has a daily waste supply of around 12000 tons. There is a large untapped market in China.
It is noticeable that there is gap between renewable resource areas and major hydrogen demand markets in the medium and long term. To bridge this gap, different scales of storage and transport technologies need to be developed for national hydrogen distribution. For example, liquid tanker trucks can be used to transport high-volume hydrogen from west to east.  More detailed analysis on future development of hydrogen storage and transport means will be available soon on our website.
Business opportunities
China’s transition to green hydrogen production indicates a few emerging and promising markets, investors and concerning manufacturers would be better keep an eye on:
Should you have further questions about hydrogen production and related topics, please feel free to drop us an email at info@integral.net.cn., and don’t miss out our next blog about hydrogen storage and transport.
■ Click here for new membership registration.
( Member registration is free. After registration, you can view and download reports in our database)

12345678910Next pagethe last page
We welcome your comments and questions regarding this article! Please fill in the comments below.