Share this article：
The number of views：2344
■ Date: Feb 28, 2020
【What is the Green Electricity Certificate in China? Will it Lead to New Opportunities? 】
Author of this article 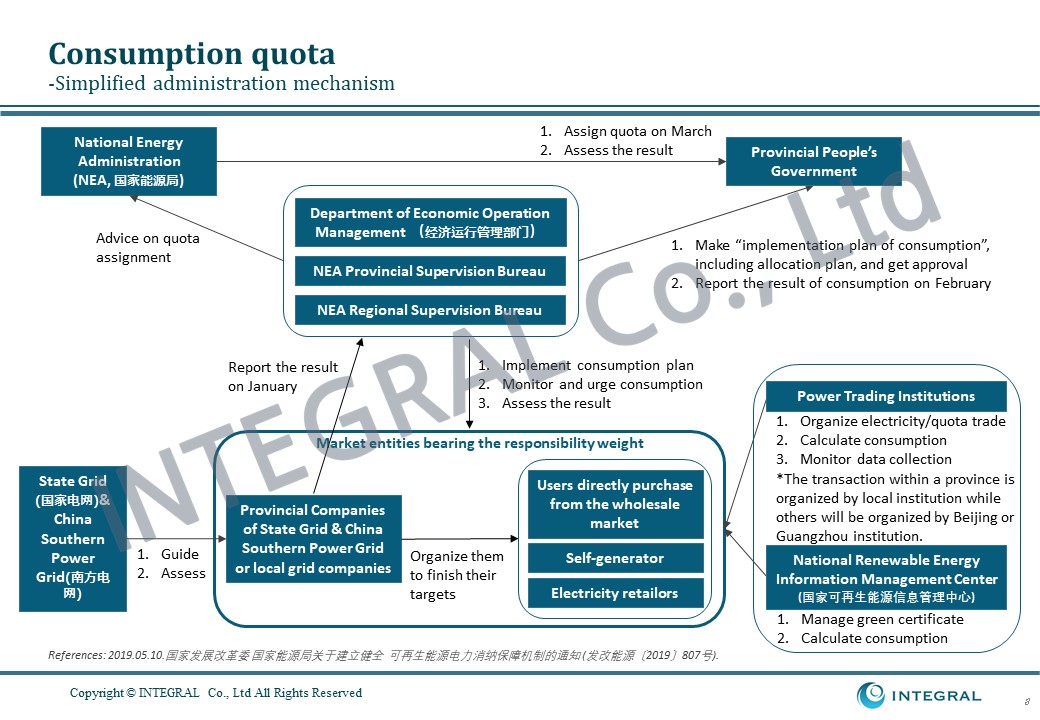 There are four main methods for each province / market entity to achieve its assigned consumption obligations. 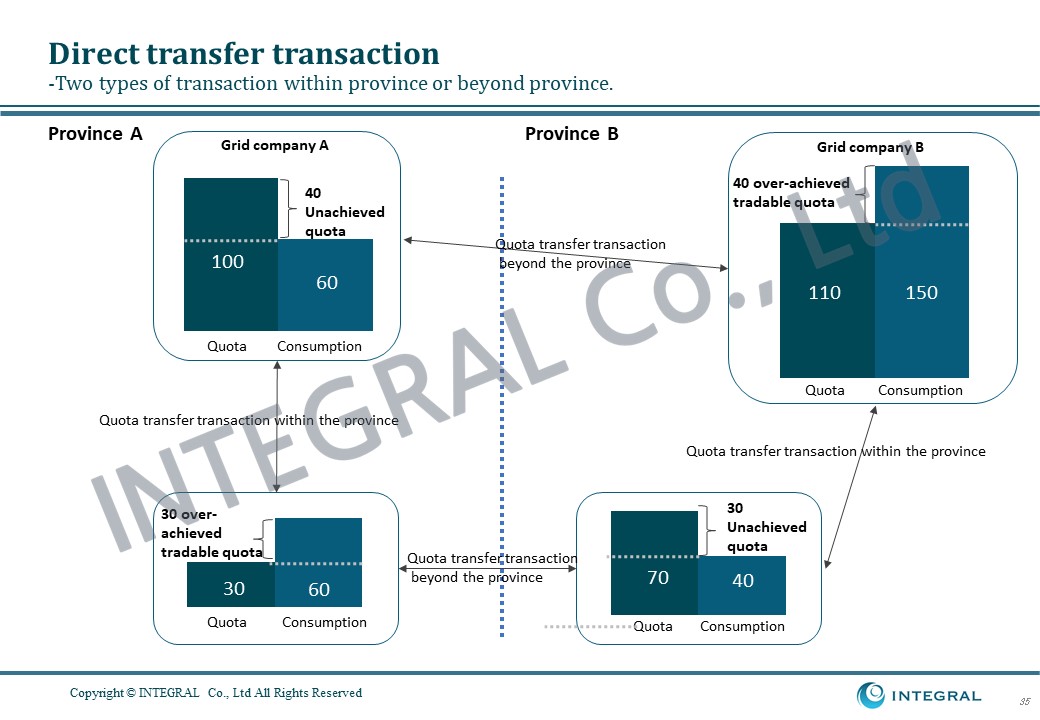 References: 2019.05.10.国家发展改革委 国家能源局关于建立健全  可再生能源电力消纳保障机制的通知 (发改能源〔2019〕807号)
Market entities that have achieved their quotas can sell the actual consumption amount over the quota to market entities that have not achieved their quotas. Under-achieving market players can achieve their quota by purchasing their consumption. Although they are not actually consuming it, they are considered to have consumed renewable energy-derived electricity. There are two types of transaction: a transaction within a province or beyond a province. Under the jurisdiction of each power trading institution, each player can transfer quota space/consumption amount according to individual transaction within or beyond their province. It can be reasonably assumed that a province or grid company that plays the leading role in their province would mainly join the transaction beyond the area of each province. This is because it is highly likely that after they calculate and collect their total consumption amount in their province, they may start the direct transaction with another province. The price is compared with the green certificate, and it is highly likely that the price will be equal to or lower than the price of the green certificate that can be purchased on the platform. It is also forecasted by our research that the market size of direct transfer transactions will reach a maximum of 26.194 billion RMB by 2030.
Green Electricity Certificate (Green Certificate)
Figure 3.Players on the platform of Green Electricity Certificate 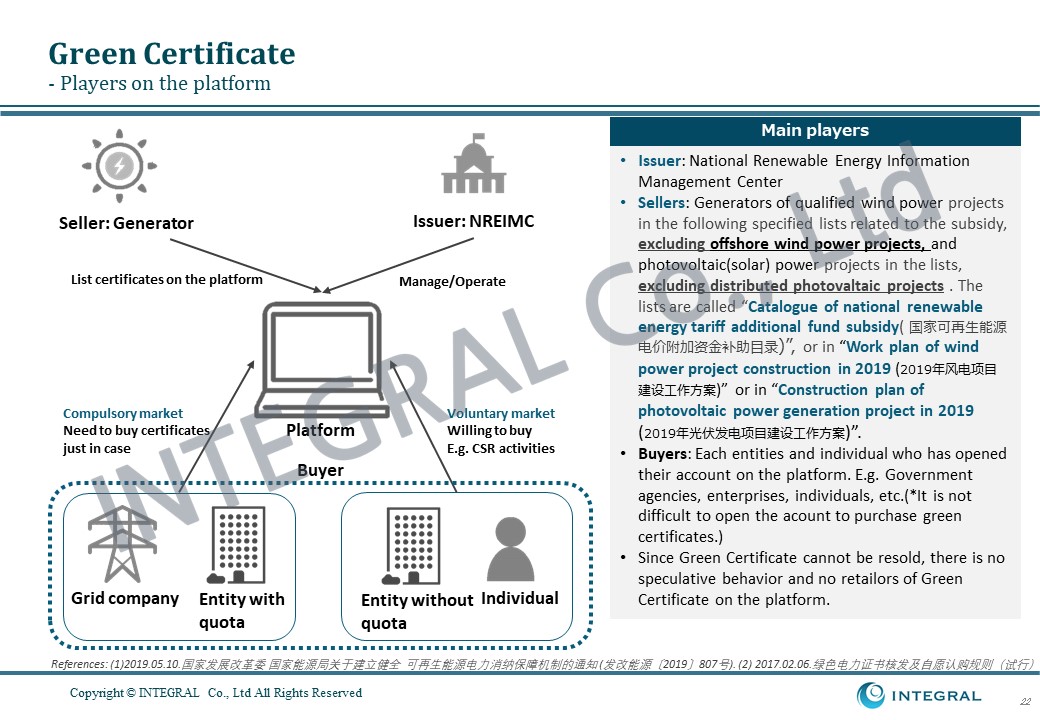 Currently, it takes time to receive the subsidy, which has affected the cash flow of the power generation company. By selling Green Electricity Certificates, cash can be collected quickly.

There are also some important conditions for issuing Green Electricity Certificate during the trial period.

To sum up, the seller is a designated onshore wind power company and a non-distributed photovoltaic power company. By sending all power to the state-run or equivalent grid company, it can issue a Green Electricity Certificate corresponding to the amount sold. On the other hand, there are no strict restrictions on buyers, so anyone can purchase if they create a purchase account on the platform.

The relationship between Green Certificate and direct transfer transaction

Which are preferred or prioritized by entities who want to purchase? Given the market mechanism, the cheaper ones are purchased.

Figure 4. Simplified mechanism of two options for players who cannot achieve their quotas 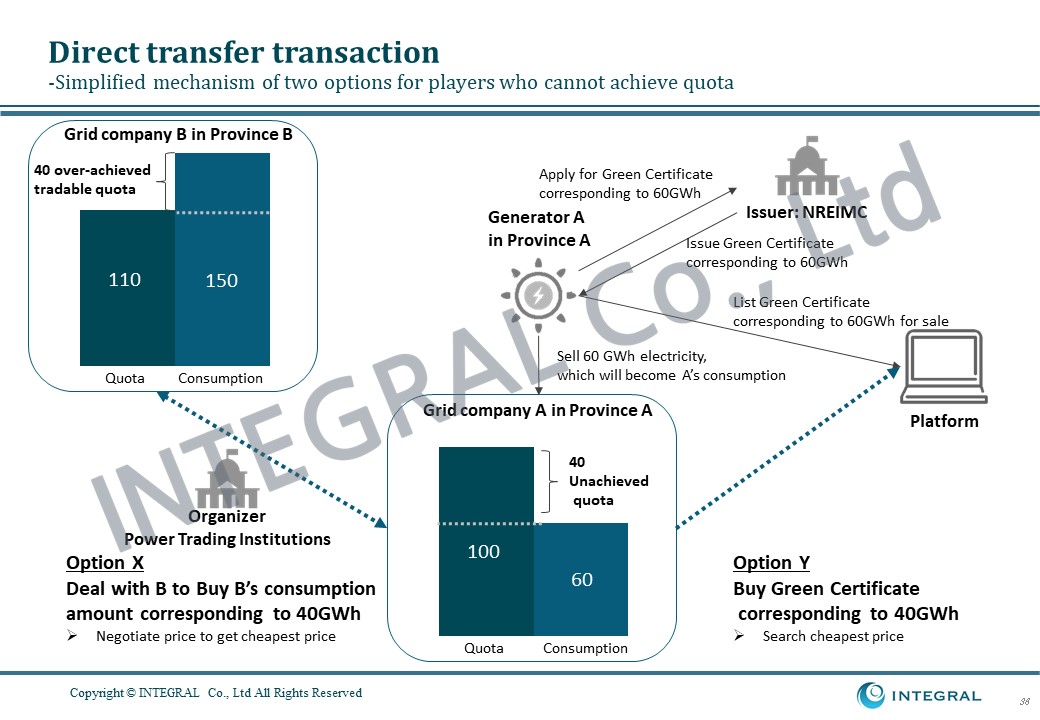 References: 2019.05.10.国家发展改革委 国家能源局关于建立健全  可再生能源电力消纳保障机制的通知 (发改能源〔2019〕807号)
References: 2017.02.06.国家发展改革委 财政部 国家能源局关于试行可再生能源绿色电力证书核发及自愿认购交易制度的通知发改能源[2017]132号
Currently, the price of the Green Electricity Certificate listed for sales can be referenced on the platform, and it is expected that the price in any direct transfer transaction of consumption amount should be negotiated based on that price. Market entities that have achieved a quota want to make at least some revenues by selling their actual excess consumption over their quota. Additionally, since the seller is an entity that does not receive subsidies and there is no direct relationship between transaction price and subsidy price, it can be sold even cheaper than the Green Electricity Certificate, which is currently priced with subsidy price considered. Although the price of direct transfer transaction has no price cap, it is likely to be sold at a lower price than Green Certificate . This is because there is no point in holding an excessive consumption amount without selling, while generators cannot receive subsidies corresponding to the amount of Green Electricity Certificate that they sold.
In addition, state-owned grid companies in each province / city may be responsible for organizing the allocation of market participants in the region. To avoid the cost of purchasing green certificates, it is likely that direct transfer transaction inside and outside a province is promoted at first in such a way as to allocate excess consumption amount to entities that have not yet achieved their quota so as not to miss out on sales.
Last, but not least, considering the fact that in many cases there is a relationship between a parent company and a subsidiary of a state-owned grid company in direct transfer transactions between provinces, quota transactions could be cheaper or free between them.
For these reasons above, in the compulsory market, direct transfer transaction can be prioritized rather than Green Certificate.

In order to support electricity generators, the market must be activated and Green Certificate must be sold at a certain price. On top of that, there are currently several issues.

In conclusion, although currently Green Electricity Certificates are not very attractive as an opportunity to the companies who have their business in the new energy sector because of the market size, the strict qualification for issuance, and some unique transaction rules to regulate the market. Nevertheless, the market will grow and the strict regulation and added rules will be modified by the government to promote renewable energy, so the market can become more attractive. For the future opportunities, it is better to understand these mechanisms and to keep an eye on the government policies related to renewable energy. By March 2020, official figures on consumption quota obligations in each province will be announced. It is highly suggested checking this actual figure.
Feb 29, 2020, Akira TSURUTA, Director, INTEGRAL
If you like this article, please also refer to our comprehensive analysis report "China’s Power Market and Green Electricity Trade" in our database.
■ Click here for new membership registration.
( Member registration is free. After registration, you can view and download reports in our database)

12345678910Next pagethe last page
We welcome your comments and questions regarding this article! Please fill in the comments below.