Share this article：
The number of views：362
■ Date: July 29, 2019
【Go-to-market strategy of foreign FC makers in China】
(*This blog was written before Hydrogenics was acquired by Cummins)
Author of this article 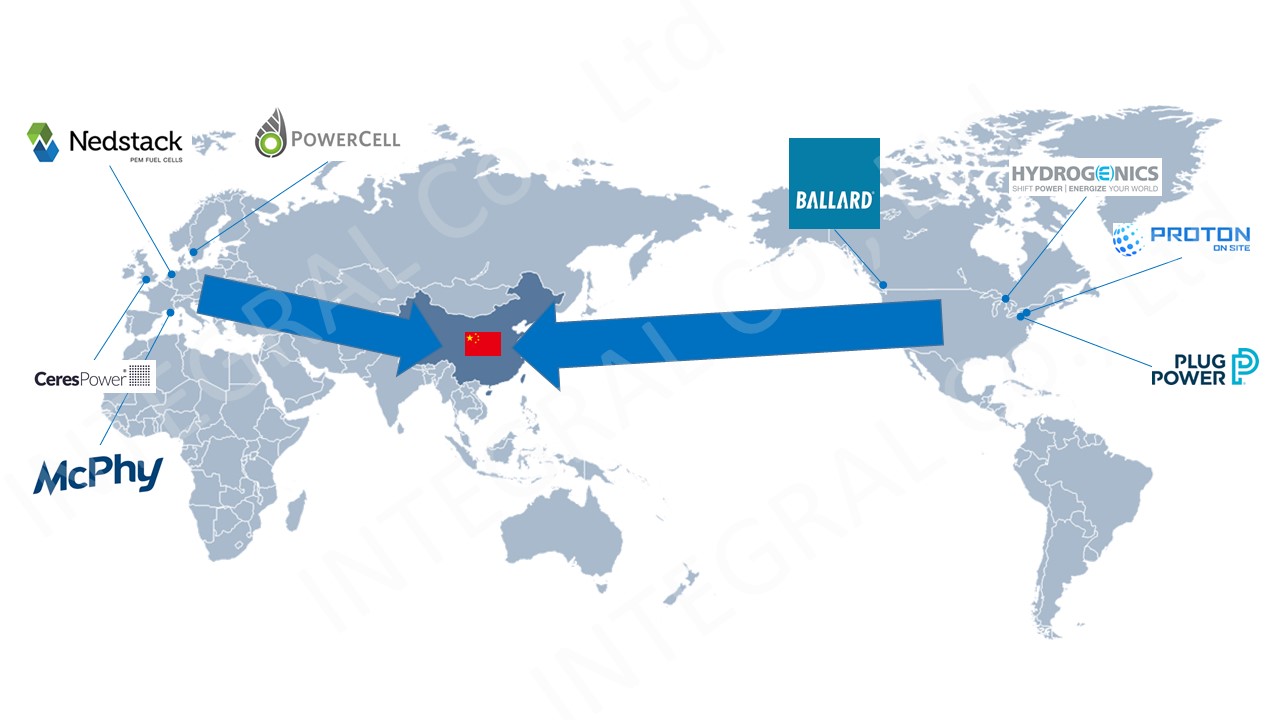 Overseas companies are of course paying attention to the potential demand of the Chinese hydrogen fuel market, and various companies are trying to enter China. In the hydrogen fuel cell business, which is a high-tech business, when they enter the Chinese market, they are required to consider and make a decision in view of the balance between manufacturing costs and the prevention of technology and know-how leakage, as well as entry costs and speed. At present, when we look at cases of major fuel cell-related players entering the Chinese market, there are four main types of entry.
1: Export
E.g.) Power Cell has been exporting fuel cell stacks to Chinese automaker Wuhan Tiger Fuel Cell Co. Ltd since 2017.
With lowest risks, companies with this strategy manufacture products overseas and sell them in the Chinese market. However, this entails export costs, customs duties, and political risks like recent US-China friction. Also, many hydrogen-related equipment manufacturers have higher labor costs in their home countries than in China, making inhouse manufacturing more expensive than producing locally in China. Furthermore, localization of products to the Chinese market is slow, and it is considered difficult to quickly gain a large market share.

E.g.) Hydrogenics focuses on building a platform with system integrators for medium and large-sized vehicles (buses, trucks, etc.) in China, and has established the Certified Integrator Program (CIP) to work with multiple integrators to introduce Hydrogenics fuel cell systems to the market.

By understanding the Chinese market and entering into OEM contracts and strategic alliances with local partner companies that already have a sales network, they can accelerate the localization of products such as fuel cell systems, and gain market share faster than export. It is also expected that additional revenues, such as technology transfer fees of fuel cell stack manufacturing technology and royalties, will be obtained. However, at the same time, there is a risk that the company's state-of-the-art technology could be leaked to partner companies, so it is important to firmly manage intellectual property such as its own technology and know-how. It is also important to identify and choose partners carefully.

3: Joint venture with local partner company
E.g.) Ceres Power announced in 2018 a long-term strategic capital alliance with China's largest auto parts maker Weichai for the Chinese market. In this partnership, the company announced the establishment of a joint venture in fuel cell manufacturing.
E.g.) Ballard (see below)
By connecting more closely with partner companies through capital alliances and establishing joint venture companies in China, local production becomes possible and they can aim for a larger market share more quickly. No transportation costs or customs duties are required. There is also an opportunity to obtain subsidies from the government as a local company. Additionally, it is possible to use relatively cheaper labor in China and to reduce manufacturing costs compared to overseas production. Nonetheless, the risks of technology leakage and of control of joint venture are significant, so it is imperative to select the right partners and to develop clear business strategy in the long term.
4: Establish a local subsidiary in China
E.g.) No applicable players so far.
The risk of technology leakage can be avoided and they can get benefits from local manufacturing, but the risk of capital investment is high, and they need to build local know-how and networks from scratch. In China, where the business culture, legal system, and regulations differ greatly from those in Europe and the United States, there is a high risk of failure if an overseas company, without experience in entering China, alone manufactures fuel cell and hydrogen-related equipment in China.
Considering the above four options, finding a local partner company and establishing a licensing agreement or joint venture can be a reasonable way to enter the growing hydrogen business and fuel cell market in China and to gain the market share in the future. Next, I would like to mention two foreign fuel cell companies as examples of entering the Chinese fuel cell market.

Ballard is a Canadian fuel cell manufacturer that has been expanding into China since 2015 in addition to the United States and Europe.

Hydrogenics is a Canadian fuel cell manufacturer that also builds hydrogen stations and has been actively expanding into China since 2015.
Two Canadian fuel cell companies have begun to aggressively enter the market around the same time, targeting the fuel cell market for commercial vehicles in China. Ballard has entered into a strategic capital alliance in 2018 with Weichai, China's largest automotive parts manufacturer, which currently produces diesel engines for heavy duty vehicles. As part of the alliance, the company announced that it would establish a joint venture in Shandong Province and begin manufacturing next-generation fuel cell stacks in China. It seems that it is trying to increase market share by using Weichai's ecosystem in China. It has also had a strategic capital alliance with Broad Ocean, whose subsidiary, Shanghai Edrive, produces OEMs of Ballard fuel cells in China. According to Ballard's financial report, the program generated $ 3.5 million in revenue from technology transfer in 2018. In addition, Ballard outsourced OEM production of fuel cell stacks to Ballard synergy, a joint venture with Sinosynergy, and systematized them through its partner Refire and sell them to major auto makers, successfully entering the market quickly.(*Picture 1) It is said that 70% of FCVs currently on the market use Ballard Synergy stacks. 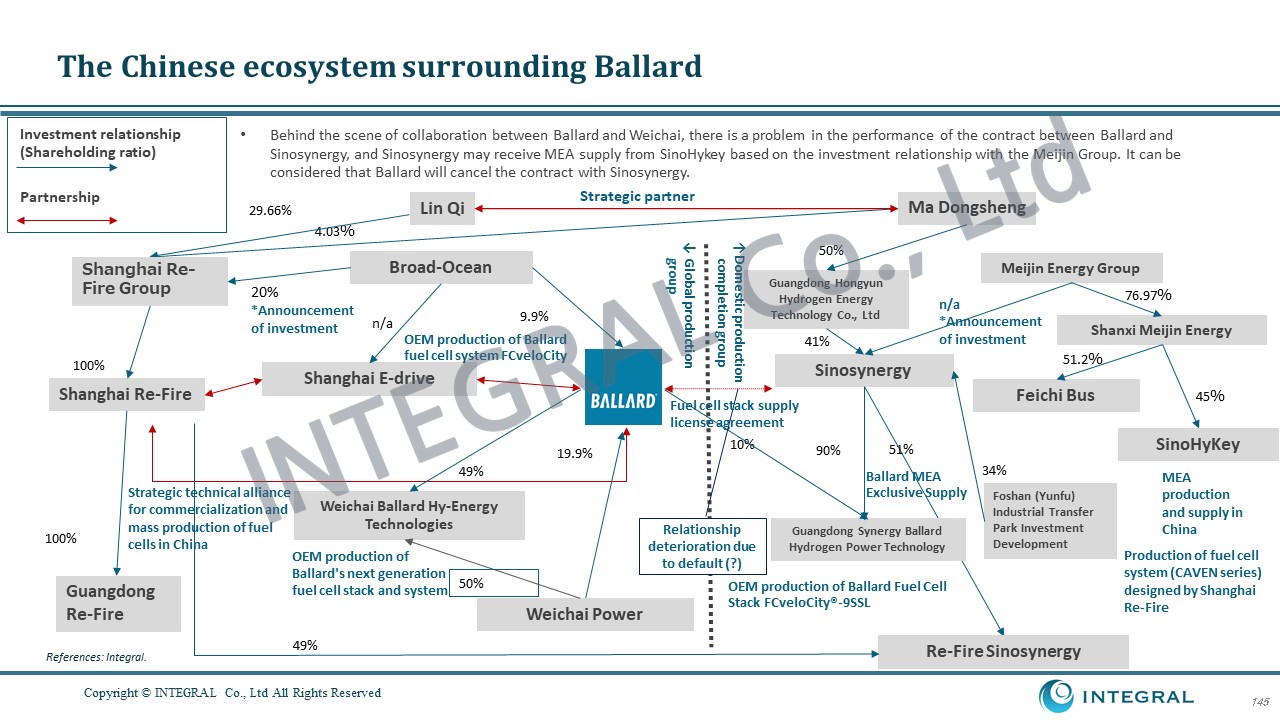 Picture 1: Ecosystem surrounding Ballard in China
Hydrogenics, meanwhile, has a strategic alliance with Beijing fuel cell maker SinoHytec. It is thought that by partnering with SinoHytec, which has many car manufacturers as customers, Hydrogenics aims to jointly develop and provide a new fuel cell system specializing in the Chinese medium- and heavy-duty vehicle market. Also, since 2017, the company has entered into a strategic capital alliance with Snowman, a fuel cell compressor manufacturer in Fujian Province. Hydrogenics sold its 17.6% stake to Snowman, funded by a Geely-related fund, a major automaker. It seems that through its capital alliance with Snowman, Hydrogenics has aimed to incorporate the relationship between Snowman and Geely and to incorporate Geely into its ecosystem.
As described above, both companies have formed alliances with local partners, including OEMs, and have established a system for producing fuel cell systems locally, but there are significant differences in how both companies enter the Chinese market. In short, Ballard takes more risk than Hydrogenics. Ballard manufactures FC stacks, which is a core component of fuel cell, in China through OEMs or joint ventures. On the other hand, Hydrogenics manufactures FC stacks at its own overseas factory.
The difference between the two companies can be seen. While Hydrogenics takes a conservative approach and avoids leaking core fuel cell stack manufacturing technology, Ballards focuses on rapid market entry and strategically creates a virtuous cycle of generation of revenue, ranging from component supply such as MEA, stack manufacturing technology transfer fees, and product sales royalties under OEM contracts, to transferring those revenues to R&D.
It can be also said that while taking an aggressive entry strategy, Ballard also hedges risks to prevent the critical technology leakage by manufacturing, at its own plant in Canada, MEA, which is a core components of its stacks.
Ballard’s strategy of manufacturing MEAs abroad and stacks in China, appears to be an effective strategy for managing intellectual property in a well-balanced manner in fuel cell manufacturing when entering the Chinese market. Nevertheless, at present, local Chinese companies that manufacture MEAs, such as SinoHyKey, are starting to appear in China one after another. 【 Movement of domestic production of MEA in China is accelerating, and newcomers are coming one after another, will it intensify competition in the future?​ 】
Domestic fuel cell stacks using MEA manufactured in China will have a great advantage in terms of cost, so considering the current trend of domestic players who are rapidly improving their technical level by taking in engineers with advanced technology from overseas, the strategy of manufacturing MEAs abroad may not work well in the future. Moreover, since there can be a risk that the Chinese government supports with subsidies and tariffs companies that locally produce innovative components such as MEA, it may be necessary to take some measures to minimize the risk of technology leakage, and eventually consider a strategy to shift to local production of MEA in China.
Hence, how foreign companies, including Ballard, will choose local partners in China and move towards full local production, including innovative components, and how to accelerate their entry into the Chinese market while protecting their advanced technology are key perspectives. Watching oversea players from such points of view while monitoring local market and policy trends is important to formulate strategies for entering the Chinese hydrogen business and fuel cell market.  (Details of the subsidy is described in our report:【 Hydrogen and Fuel Cell Industry in China in 2019 】)
Last, but not least, let me briefly introduce some of other companies that are currently entering the Chinese market.

Nedstack is a Dutch PEM fuel cell manufacturer. It designs and manufactures PEM fuel cell stacks, mainly for system integrators, and implements PEM stacks to a wide variety of applications from mobile to large fixed type. As a fuel cell stack provider, it has established a fuel cell system assembly plant in Zhangjiagang, Jiangsu Province in cooperation with local companies in 2018.

Proton Onsite is the world's largest hydrogen production equipment manufacturer in the United States with advanced PEM electrolysis technology based on more than 20 years of research and development. It was acquired and made its subsidiary by Nel ASA in Norway in 2017. As for the Chinese market, it signed an agreement with SinoSynergy (广东国鸿氢能科技有限公司) in 2016 to exclusively supply large megawatt-scale PEM electrolyzers to deploy FCV buses in Foshan and Yunfu.

McPhy was founded in France in 2008, starting with the development of hydrogen solid storage technology. It is active in the field of production, storage and distribution of hydrogen, designing, manufacturing and integrating hydrogen equipment. It has entered the Chinese market by providing alkaline electrolyzers to power plants in China.
July 29, 2019, Akira TSURUTA, Director, INTEGRAL
■ Click here for new membership registration.
( Member registration is free. After registration, you can view and download reports in our database)